During the fall of 1912 a fire occurred at the Hoke Hotel in Penryn, PA. A small group of citizens extinguished this blaze by forming a bucket brigade from a hand pump near the building. On November 6 of that year, this group, along with others, met to organize and form the Penryn Fire Association. By December the association had gathered enough donations to purchase a hand-pulled chemical cart for $425.

The chemical apparatus was housed and responded from the Hoke Hotel horse stable, where rental space was established at $3.66 per year. A 12’ x 16’ shed was eventually built on leased property in 1916 at the cost of $27.25. Resources were very tight and it was not uncommon for the treasury to occasionally drop below $1 until April, 1926, when it exceeded $100 for the first time. Public demonstrations of the chemical apparatus were given on occasion to raise civic interest and stimulate donations. The apparatus responded successfully to numerous fire emergencies. Later, removable shafts were added to the cart in order to use horse power. It was also modified to be towed by a truck for longer distances.

The Penryn Fire Company No. 1 charter, signed by twenty-four men of the community, was decreed at Lancaster County Courthouse on March 5, 1927. John T. Weber, organizing president, went on to serve in that capacity for twenty-three years, until 1935.

In 1928, Penryn purchased its first motorized fire engine at a cost of $4450. The Hahn custom-built pumper, sporting a 350 gpm rotary pump, required the extension of the “fire house” shed to accommodate the vehicle length and a coal stove was added. The original chemical tank was mounted cross-wise on the new vehicle, improving its water capacity to ninety gallons. During later years, improvements were added, such as a windshield, hydraulic brakes, hose reel, and tandem rear wheels. The Hahn pumper remained in active service until 1965!

In 1950, a fire house was constructed on Newport Road at a cost of $14,000. It included a commercial style kitchen. There were quoit pits in the basement and room for ping-pong. An active ladies auxiliary was established. Fund raising activities consisted of nearly everything under the sun, including public suppers, spelling bees, chicken barbeques, breakfasts, raising tobacco, raffles, soup sales, auctions, carnivals, and block shoots. When a new and larger engine house was needed for apparatus, the building on Penryn Road was realized in 1973. The auxiliary continued to operate the Newport Road facility for some years until it was later sold.

Various apparatus was purchased and replaced over the years including a 1955 GMC-Darley pumper, a 1965 GMC-Howe pumper, a 1975 Chevrolet squad van, a 1978 Seagrave pumper, emergency response snowmobile (retired), and a 1979 Mack tanker.

For the past one hundred years the Penryn Fire Company has been a totally volunteer department, providing the ever changing needs to its community and mutual aid to surrounding area fire companies. The community provides excellent volunteers who are properly trained and are dedicated to these needs. 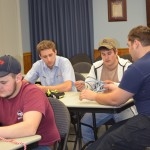